so a couple of weeks ago i presented my third academic publication, this one titled “persisting chat for communities of practice.” 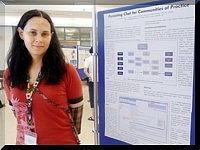 in layman’s terms, it’s a new logging system for online group chat (irc, jabber, etc.) with special integrations into non-synchronous systems such as web forums (academically often called asynchronous learning networks), blogs, etc. the goal is to make chat less transient and throwaway, to promote it to a first class citizen within the wide variety of mechanisms that can be used to help communities. it’s especially designed for communities of practise as described by lave and wenger out at xerox parc way back in the day. go read the linked article, it’s not half bad for wikipedia.

the system will be released under an open source license later this year. if you’d like to get involved, comment here using your real email address and i’ll get in touch.