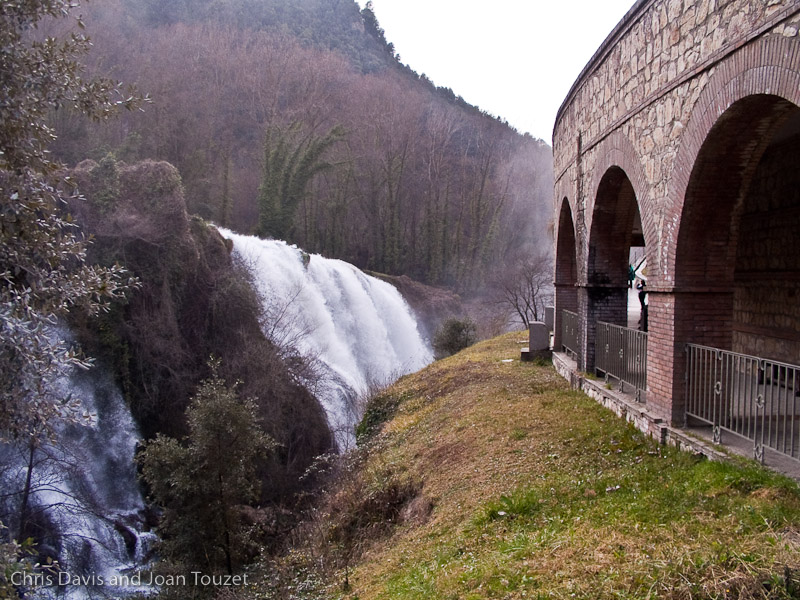 Just like the subject says, the Italy vacation photos are online.

Dragging myself to consciousness, I gasped for air. The images ofÂ  gravestones and memorials of the intellectual elite, festooned with working mainframe key punches and proofs of famous mathematical theorem in honour of their contributions to society, still lingered. I could still feel the dirt being shoveled on top of me prematurely, as I struggled to break free of my restraints. The bottoms of my lungs burned like the teenage mistake of inhaling deeply from a clove cigarette. Still, it burned less than the stinging sensation of my sub-conscious clawing through a thin layer of conceit I’d previously put up in my life to hide the twin holes of fear and shame.

Lately I’ve been working harder on my doctoral research, in the hopes that this may be my best chance to leave something of value behind in this world. I’ve chosen not to raise children, and judging from the superior job my friends J., D., N. and S. are doing with theirs, I made the right choice. I then look at my friends with some life calling they’ve dedicated themselves to since childhood, and wonder how different my life would have been if I only could have settled on one thing to do, rather than insisting on being a polymath.

Then I think of the reality: it’s a huge conceit to pretend that anyone will remember me at all 5 years after my death, let alone 500. The odds against that are so low that they’re unthinkable. But why the terror of it happening, if it’s so likely? And how does this square against my personal philosophy that it’s the ideas that count, not the people?

OK, so I’ll substitute idea for name, and the good feeling I would get from knowing I helped other people far into the future. It’s still a huge conceit to pretend that anyone will remember my ideas at all 5 years after I come up with them, let alone 500. So why fear the inevitable? And why put so much pressure on myself to achieve something that’s rare (and, most likely, out of my hands)?

Interestingly, I don’t fear death. I think I overcame that one many years ago when I struggled with some of the other demons in my life, and came out on top. Perhaps this is my chance to overcome this ridiculous idea as well. There was definitely a time at which I really bought into the idea that helping just one person was as good as helping a whole flotilla – and I’ve definitely helped at least one person in an immense way. What changed?

Now, after talking it out online, I’m fairly sure it was the dawning realization, though not quite ecological, that the resources I have burned (money, time and patience of those smarter than I, and yes, non-renewables like jet fuel and natural gas) are above the average. I also have been given a lot of unique and interesting opportunities, and gained a lot of special skills. It was then I decided that I had to do everything I could to put all of that good stuff back into the world, in as many ways as possible. Anything else is just conspicuous consumption. I owe it to everyone else to do as good as a job as I can to pay things back.

The thing is, my life is almost all about paying it back in one way or another. I’ve had my phases of acting spoiled, but after being forced (almost at knife-point) to volunteer my time in college, helping others has become a sort of addiction, perhaps even an unhealthy one. My job for many years now has nothing but helping other people get their jobs done more effectively. I teach, I learn (then re-teach what I learn), I research (and then teach what I find out), and I volunteer my time when I know full well I really should be taking it for myself. I helped keep a household of friends going when no others could really make ends meet. I’ve helped those in need find money for surgery, and given them the emotional strength necessary to pull through. It’s never felt like an obligation. But it’s never felt like it’s enough.

I treat that feeling of emptiness inside as telling me that I still have more work to do, more in me to give to others. Perhaps it is only a twisted redirection of guilt and shame, a hope at becoming immortal in some sense. But I don’t work hard only to see my name in lights (especially since it never happens), or predicate it only on the knowledge I’ll gain something out of it. It’s because I like doing a good job, because it does feel good to know I’ve accomplished something concrete, like presenting my first paper in several years at a conference. I’ll do it even if I’m ignored, or if someone else claims the credit for my work. (Unfortunately this sometimes makes me a poor businesswoman.) And, more importantly than anything else, I know that when I find I am doing something that causes harm to someone else, I change how I act. This is my own private version of walking softly; I have yet to figure out how to correctly carry a big stick, so I walk with my hands in my pockets instead.

And yet I still have dreams like this one tonight that wake me at 3:30 and prevent me from going back to sleep, and keep me writing uncontrollably. What am I missing? Am I acting reasonably? Should I be doing more? Less? Something different? I know I’m not the only person who has felt this way, but I also know my attention span is so poor right now that I can’t think of where to start researching to look at motivations of the great, the noble, the weak and those of the despicable monsters.I need a sanity check (and maybe a kick in the ass) so I can move forward. I refuse to sink into solipsistic musings, but a little introspection every now and again can’t hurt!